After completing a large-scale colour work in 2009, the woven curtains for the dining room of Kasteel Wijlre, I focused on creating new work. I found the starting point in a chromatic effect I had presented in a number of photographic works in 1977, which has remained with me ever since.

Prior to those works, I had generated different types of lines composed of tiny squares, with the aid of a computer and monitor. To make visible the course of a wavy line, I mixed a palette of 256 light colours (using sinus waves). Consecutive segments of the line were indicated in a colour picked at random from the palette. When the entire monitor was full of coloured elements, which resulted in an erratically coloured surface, the line did not stop, but continued its course across the colour-filled computer screen. The process rendered rapidly and, in a matter of seconds, variants with a different sequence of colours from the palette, appeared.

I was particularly interested to see that, rather than deteriorate into amorphous scribble, the undulating line retained its integrity. And, more remarkable still, the cohesion between the colours remained; although all 256 colours were not simultaneously visible their sequence was arbitrary, the amount of colour varied continually, and the distribution over the plane changed incessantly. This served as the basis for the realisation of my series photographic artworks, KTV KLEUR 1977. 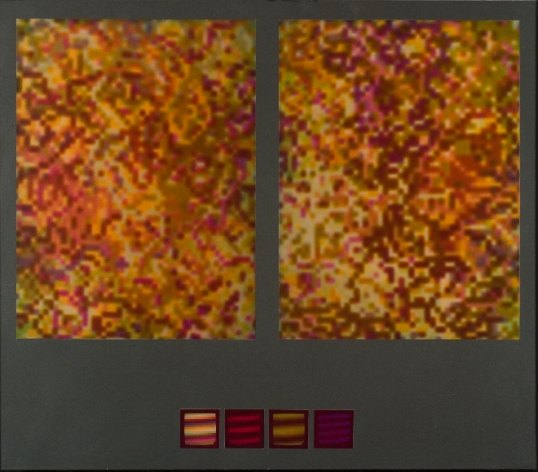 In 2013, I returned to the principle of the chromatic effect I had explored in the photographic works, this time in the form of painted diptychs entitled Kleurverhouding or Colour Relationship. I used the same six colour tones for all works in the series (the colour type: yellow, orange, red, etc.); however, the lightness (light/dark) and saturation (strong/weak) of each diptych differed, and with this continually generated their own palette. With my very first abstract works in colour, the series of paintings Wetmatige beweging (1963), I had already noted that in order to achieve visual cohesion, the relationships between the colours are equally – if not more important – than the individual colours. I have always found that cohesion in a meticulously determined relationship of colour tone, lightness and saturation, ever since.

In the series Colour Relationship, all relationships within a palette are mixed by eye, using the criterion of being spaced at equal distances on the colour wheel and an incremental increase or decrease in lightness and saturation. The palette derives its visual coherence from these structured differences. Although the colour tone is the carrier of lightness and saturation, the impression of the palette is defined by the relationship between the latter pairing.

In the left-hand panel of a diptych, the six colours of the palette are distributed equally over the picture plane; in the right-hand painting, the colours are unevenly distributed, thus differ in number and placement. Despite this, the palette evokes the same colour impression. Some colours in the right-hand painting make a stronger impact due to their quantity and shape, but this has no influence on their colour relationship. 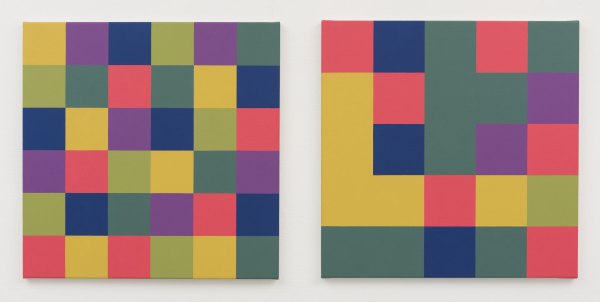 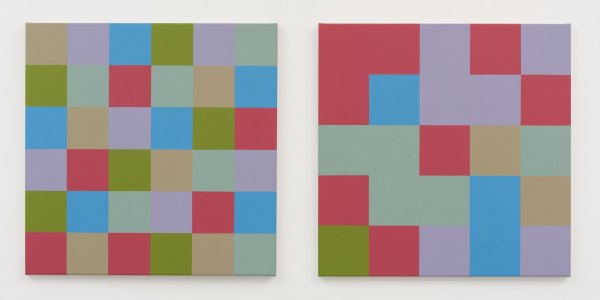 I mixed a new palette for the series of triptychs Articulation of Colour (2016), this time with seven colour tones at equal intervals on the colour wheel but, again, with varying degrees of lightness and saturation per triptych. In the middle section, the seven colours are evenly distributed, appear in equal numbers, and share uniform coverage. With this, all the relationships and interactions are equal. I gave the two side panels unequal coverage, more pronounced than that found in the Colour Relationships series, to achieve a different impression of the same colours. The relationships between the colours are no less recognisable, thanks to the relationships between the colours. In the pair of side panels the variable coverage, which accentuates specific colours, also highlights the qualities of the palette that evoke to the viewer's preference, association and mood in a different fashion.

If we look around us, both elements – colour relationship and colour coverage – are manifest in all things, simultaneously. However, we tend to be unaware of this and either see things very broadly or only register individual colours.

The engineer D. Dekkers (cThrough.nl) wrote an algorithm to achieve the greatest uniform distribution of six colours on an area measuring 6x6 squares in the Colour Relationship series (left panel), and seven colours in an area of 7x7 squares in the series Articulation of colour (centre panel). Dekkers based his algorithm on the criteria that every colour must appear with equal frequency (each of the seven colours appears 7x), each colour pair must have the same number of transitions (each 4x) and squares of the same hue must never adjoin horizontally, vertically or diagonally. Despite this constraint, a multiplicity of solutions emerged. A distribution of five colours over a plane of 5x5 squares generates 14205120 possibilities; for a distribution of six colours over a plane of 6x6 squares, the number was so enormous it would have taken weeks of calculation to specify precisely. The outcomes also presented another drawback: they generated patterns that disrupted a visually uniform distribution, such as the same colour transitions occurring in rows or columns, rotations of the same hues or the creation of figurations. Gradually, and by eye, additional criteria were defined to eliminate these disruptive patterns. What eventually resulted were scores of restrictive measures that proved too stringent when taken as a whole. Because of this, in the case of Articulation of Colour, no single configuration of the 749 initial possibilities (without restrictive criteria) remained. However, partial use of the filtering constraints resulted in only one visually acceptable option.

Each work consists of three 60 x 60 cm canvases painted with acrylic paint which is applied in as many layers as was needed to create an entirely uniform surface.